Of cages and freedom 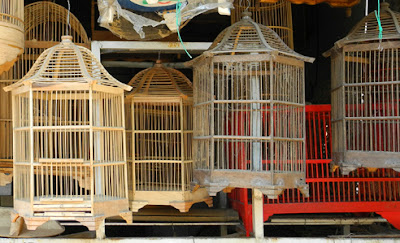 I'm a bird. Ok, not really a bird, but my resonance with Sky (and matter being released therein) is such that I might as well be one. Not surprisingly then, birdcages look like prisons to me. As soon as I saw the collection of wood and bamboo cages in the shop in Ubud, Bali, I felt conflicting emotions: On the one hand, the idea of a bird being trapped inside any one of them while being able to see the wide-open sky felt profoundly saddening. Yet on the other, these were intricate, handmade structures practically inviting transmutation into symbols of freedom. And so, the seed of the Sky House series germinated right then and there.

A lively pair to start...

The first of the Balinese birdcage Sky House pieces is a lively pair of creatures that seem to have arisen out of nature and abducted the original intention of the architecture. The doors are flung open, and just inside is an altar to freedom. The tops have been pushed open by trees growing from the root-ish legs, alive with tendrils and seeds.

With the coloring, I was inspired by the rainbow spectrum of the chakras, from red at the base, to orange and yellow as earth erupts in passion at the altar level, to the greens and blues of heartful expression as the trees merge with sky, and finally to purple as it rises transcendentally into the freedom of pure Space. 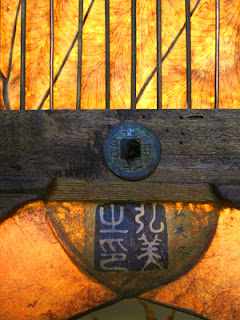 You can see in the post above how the cages originally looked at the cage shop. I had to structurally rebuild them to allow the bottoms to be opened up, while also supporting the copper wire that’s been integrated.

One of the motivations in creating a pair of pieces was a lack of rice paper and natural oils to finish them at the time. While waiting for those to arrive from Australia, as well as my earth pigments from the States, it made sense to lavish my time and attention on the structural elements, and let the “fleshier” parts emerge in response to the bones and the paper itself. 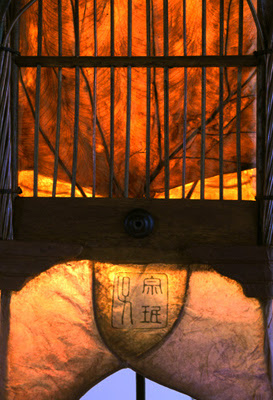 Both pieces also incorporate a large dried leaf rising from the base of the cage. The natural oil brings out the gorgeous networks of veins swirling through them. They add a sense of landscape to the inner space, with the “terrain” dipping down in the front to hold the altar spaces just inside the opening. These spaces have a temple-like back pointing toward the top. I especially like the intimacy of these glowing, amber-toned spaces. 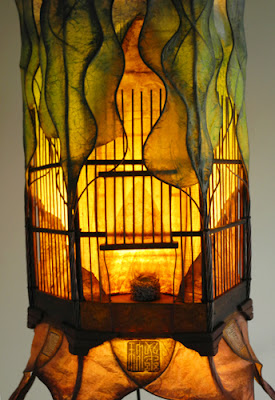 The segmented, waxed-linen wrapping of the legs is similar to Unbound. There’s a sense of the legs being both roots and a combination of ligaments, bones, and flesh. 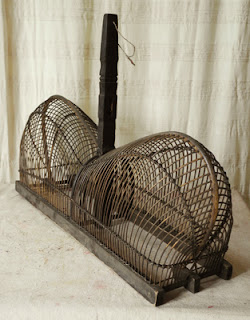 This old-style cage was hanging in front of a basket shop, and I felt like jumping up and down like a six-year-old when I saw it. Still, to think little birds would have lived in each side of it sent shivers down my spine. Obviously, both the form and function were ripe for liberation.

Just before I began envisioning the direction for this piece, I saw a documentary film on the ecosystem of a field and woodland landscape, with close-ups of insects in motion. Seeing a caterpillar lumbering along, I immediately thought of this cage, and how I wanted it to evolve. 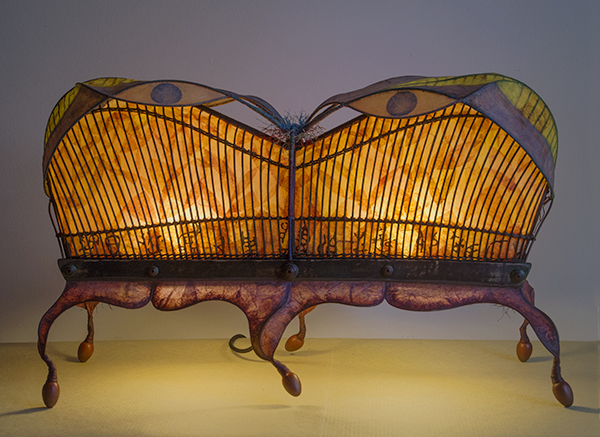 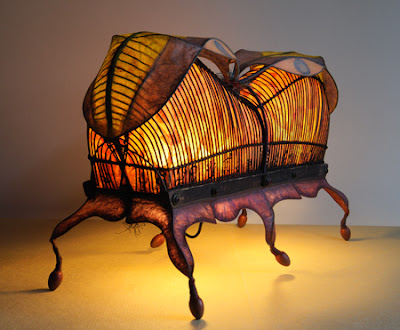 Soon after I began working on the structural elements, it came time to head off to Singapore for a new visa. There, I found a Chinese calligraphy shop with a fabulous collection of rice paper and handmade brushes. That paper, added to the small stock from Australia, inspired the play of fleshier elements in Chrysalis. 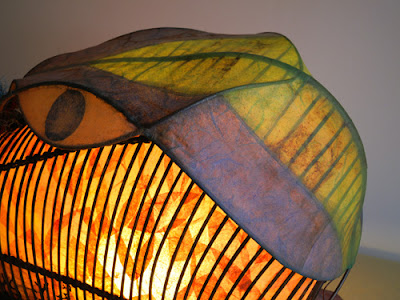 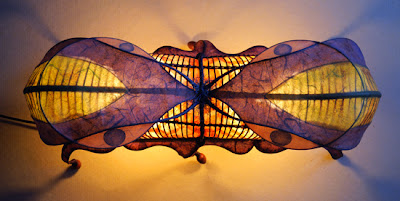 There are roughly two hundred leaf-shaped, water-colored pieces of rice paper creating the flame-like effect inside. The tops of the “body” sections are left open, allowing the light to project directly onto the green leaf pattern on the sprouting wings.

Chryalis is a mixture of life-phases: it’s a caterpillar walking, a pupa/cauldron of transmutation, and butterfly wings emerging. 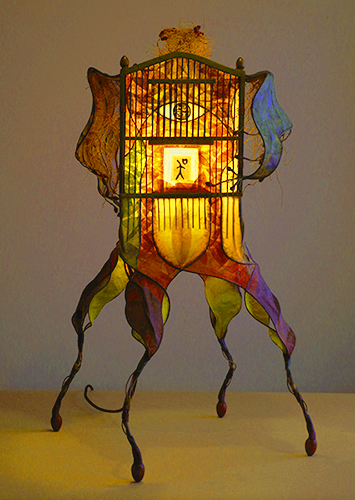 In the first pair of Sky House pieces, nature seems to grow up through the architecture, opening the roof into Sky. With Gatekeeper, the initial vision was of the architecture rising up through nature, with the roof eaves swooping down and embracing the sides. 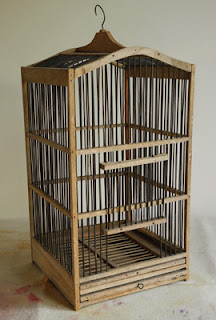 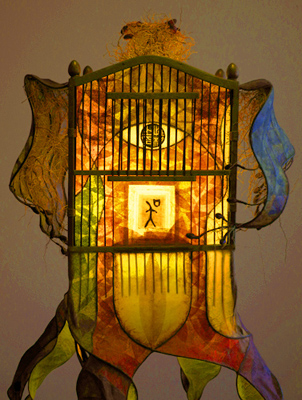 The prior piece, Chrysalis, involved a cage which was quite evocative in form. The relative simplicity of this cage suggested inviting landscape-ish imagery into the architecture, and using the layered ellipsis from Chrysalis in a more dynamic, form-suggesting way.

The eye of awareness sees through the cage door, allowing the figure (an ancient Chinese symbol) the freedom to cross the threshold, or simply reside between inner and outer worlds. 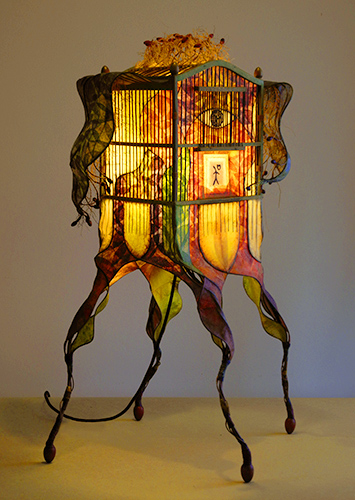 The turning gesture arrived on its own: I’d just inserted the central copper leg pieces, making it stand for the first time; as soon as I stopped holding it, the cage and legs twisted in a clock-wise direction. This spontaneous gesture instantly became a core theme, and had a major influence on the form of the wings in response to the implied motion. 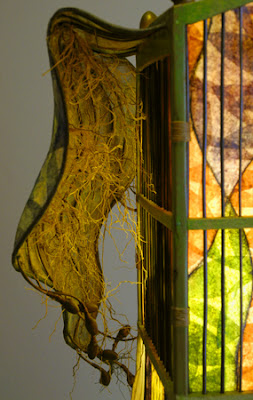 Until Gatekeeper was nearly finished, I was contemplating the areas under the wings, opening to the right material to create a presence of some sort in those spaces. As I’ve often done over the years, I took a break and went out to the garden to connect with nature briefly. I noticed some of the potted plants had weedy flowers growing in them, and I spontaneously decided to pull them out. The roots that appeared were the perfect solution! 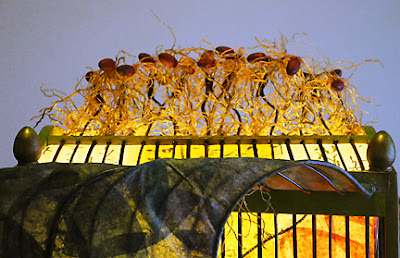 Though I’d intended to create a paper baffle to allow the warm air from the bulb to vent out the top, the roots turned out to be ideal here as well, mingling naturally with the twisted copper and creating a lovely play of light and shadow. 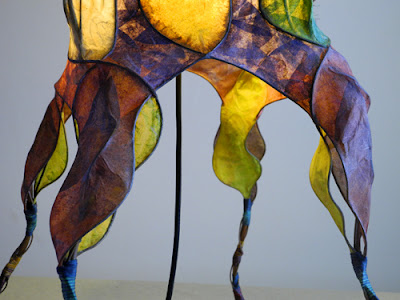 The play of the legs is similar to the first pair of Sky House pieces, but with this one, the surface splits in two before rejoining at the bottom, creating a vivid interplay of color and form, and what looks to me like a split up the thigh of a sexy dress.

On the spiritual plane, Gateway of Duality invites the coalescence of multiplicity through the portal of duality into Oneness in the light of awareness. One of the aspects I enjoy most about making art is that I get to ground in materials and the senses what can otherwise seem untouchably abstract. I often use the eye to symbolize awareness… Here, it observes the earthly realm, encompassed in the arc of the creature’s front legs.

This piece contains the most extensive use of layered rice paper vesica piscis shapes yet in the Sky House series. The ancient shape from sacred geometry arises with the intersection of two circles, denoting the Oneness underlying apparent duality. 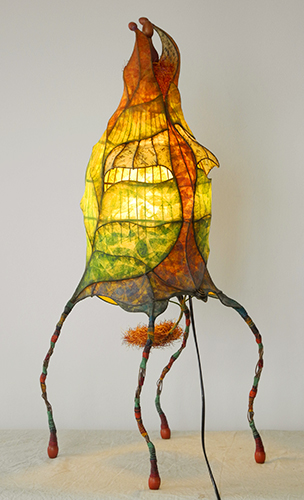 It’s a symbolic doorway between Oneness and multiplicity through duality. There’s a vesica piscis in the doorway as well, intersected by a simpler depiction of the eye: awareness evoking the meeting of duality and Oneness. One of the aspects I most enjoy in overlapping the vesicae piscis is that it spawns yet more of them, along with a spontaneous wonderland of other organic shapes of varying densities.